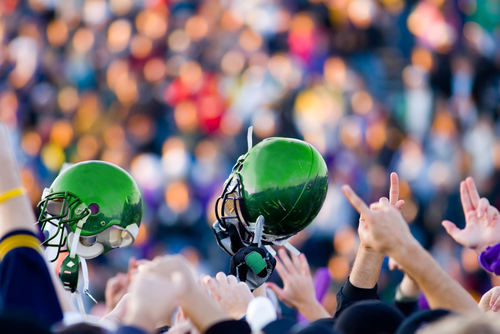 The days of pure amateurism in the NCAA are over. As early as July 2021, college athletes will be able to profit off of their name, image, and likeness (NIL). The NCAA has long prohibited student-athletes from signing endorsement deals, arguing that this preservation of amateur status increases the athlete’s credibility and emphasizes the importance of education. However, pressure from lawmakers and the general public has forced the NCAA to rethink its antiquated rules surrounding athlete compensation.

On October 14, 2020, the NCAA proposed sweeping changes to its NIL policy. These measures are slated for a January 2021 vote.
If adopted, the measures would:
That being said, student-athletes would not be permitted to use their school’s marks in any advertisements or endorsements. Additionally, the athlete could not promote activities or products that conflict with NCAA legislation (think: sports betting or banned substances). Schools themselves would also have the opportunity to prohibit endorsements that conflict with university values.

Athletes Will Be Permitted to Profit While Competing

As of now, it is clear that athletes will soon be able to license their NIL. Many details of this new college athletics world order are, however, still unclear. Below are some frequently asked questions.

1. Will college athletes be able to use their NIL as influencers?

Yes—many experts expect social media to be the prime revenue generator for college athletes. Take, for example, Trevor Lawrence, Quarterback of the Clemson Tigers. Lawrence has 123,000 followers on Twitter; 558,000 followers on Instagram; and a signature hairstyle. Hypothetically, he could enter into an agreement with a hair product company to promote their products on social media. According to FiveThirtyEight’s estimates, Lawrence could stand to make $11,371 per post.
In this hypothetical world, Lawrence could be out-earned by a female basketball player. Paige Bueckers, a freshman on UCONN’s Women’s Basketball, could earn nearly $21,000 per post—and that’s before she has stepped on the court as a Husky.

2. Will college athletes be able to hire agents?

Short answer: yes. However, many people are concerned with the current absence of a regulating body overseeing athlete representation. This gap in oversight leaves college-athletes vulnerable to manipulation and exploitation.
While professional sports leagues have athlete unions in charge of certifying and regulating agents, this is not the case in college athletics—yet. Currently, college athletes are not considered employees and, as such, can’t unionize. This is unlikely to change, as the schools themselves will not be paying college athletes—third-party sponsorships will. In this situation, athletes are considered independent contractors rather than employees.
Meanwhile, the NCAA is not a labor organization, nor is it statutorily empowered to license agents. Some federal NIL proposals have suggested that the Federal Trade Commission or an independent commission take on the role, but both ideas are fraught with uncertainties.

3. How do compliance officers in athletic departments fit into NIL issues?

New NIL regulations will introduce a host of issues that fall outside the current scope of compliance. As such, many compliance officers feel unprepared to advise on topics such as contracts, intellectual property, and valuation (to name a few). It is expected universities will provide student-athletes with some help in signing endorsement deals, but how much help is still uncertain. Title IX also poses potential challenges, as schools could risk violating gender equality rules if they were to disproportionately assist male athletes, for example.
In some cases, the university’s legal counsel may be brought in to review endorsement deals for possible conflicts with the school’s sponsorships. As the rules stand currently, it is unlikely athletes will be able to sign brand deals that conflict with the university’s own shoe sponsor. In other words, if you attend a Nike school, don’t expect your potential deal with Adidas to be approved.

4. Who will new NIL regulations most benefit?

Male athletes—particularly football and basketball players—will likely benefit most from NIL licensing. This advantage is a product of their relative popularity: college football and basketball have billion-dollar economies encompassing their sports. That being said, standouts in all arenas (think: Olympians like Katie Ledecky) will have the opportunity to benefit as well.

Federal Legislation is the Next Step

In closing, federal legislation may expand NIL regulations even further.  Although NIL legislation has been temporarily shelved due to COVID-19, momentum is expected to pick up again sometime next year. While you have some politicians like Rand Paul saying, “It’s a terrible, rotten, no-good idea to federalize college sports,” many more members of the Senate (from both sides of the aisle) support an NIL bill. Once the pandemic has slowed down, expect to see the United States government step up to the plate to take their own swing at reforming the NCAA and NIL.
Special thank you to Anna Juul for her substantial contribution to this article.